Mr. Besheer just turned 89 before the New Year, but he's not slowing down in our office!

He’s a marine, and he’s very involved in many organizations.   “I’m in good health, and to me, this is my second home,” Norman says.

Mr. Besheer just turned 89 before the New Year, but he’s not slowing down in our office.

Although he officially passed Gunter down to his son and current president Jay Besheer in the early 2000s, he’s still very involved as CEO and still shows up to work every day!  Norman handles our checks, taxes, insurance.  “I love to be a leader in my industry, as well as others, that’s kept me young, kept me sharp,” Norman adds.

Melissa Stern FOX4 FOX 4 News covers Norman’s journey that started with his 16 years practicing law and then taking over his father-in-law’s “since 1950” pest company in 1971. Click to watch!

Video on Fox 4 About Norman Besheer of Gunter Pest Control 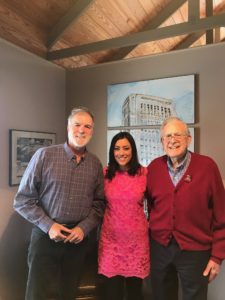 From the Fox4 story: “His son, Jay, who is now president of Gunter Pest, located at 220 W 72nd St. in Kansas City, Missouri, says his dad is definitely one of a kind.

“That’s a rare thing in today’s society for an 89-year-old to be working…in fact, he lives in a retirement community, and he’s the only one that works in the whole community,” says Jay.

“I think it’s a surprise to all of us…we’re taking it as we come, and our original plan was for him to retire at 65…and then 65 came, then 70 came, and then we just kind of stopped talking about it,” adds Jay.”

Our Gunter staff family is very proud of both CEO Norman Besheer and President Jay Gunter Besheer for their strides and dedication to the pest control industry!

Knowing What Attracts Spiders In The House Helps Prevent Infestations