Our family and our company have been local to Kansas City since the early 1900s. We have a long-standing history in this city, and we’ve worked together as a city to build a business based on trust, morals, family values, a plethora of experience, and a proud customer experience. Today we are going to talk about how our family members continue to grow our Kansas City pest control company.

With Kansas City pest solution competitors sprouting up all the time, the market has become saturated. But one thing that will always make us stand out among the rest: our family history and our unmatched experience that comes with over 70 years in the industry. It all started in the 1940s when Roy Gunter began treating homes using pre-mixed pesticides he purchased from a company in downtown Kansas City. The product was called DE-BUGG, so he loosely named his business DE-BUGG. He implemented a smart marketing tactic – putting a sticker in the client’s basement or garage – and many of these stickers exist in Kansas City’s historic homes today. In the early 50s, Roy’s health began to decline. Roy enlisted his cousin L.R. (aka Reggie) Gunter – Kansas City native, once a track athlete, and previously owned and founded Gunter Candy where the Levee in midtown now sits – to ride with him and help on the jobs. Within a few years, Roy gave all of the clients to Reggie and retired. This marked the start of our family tradition – for one generation to help the last and then pass it on to the next. 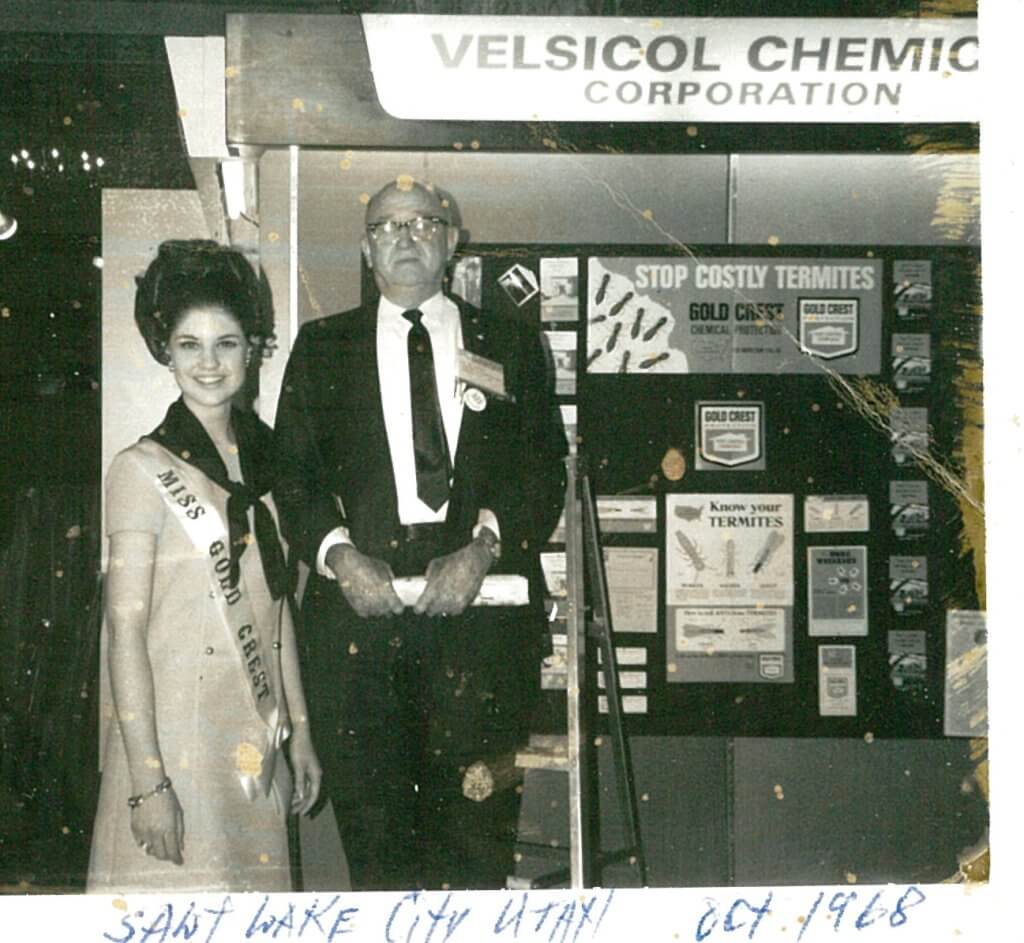 In the late 40s and early 50s when Reggie took over the business, there were only around 50 regular clients, but it was a start. To give you an idea, the average pest control pricing in the 60s was around $17.50 per job. The hardest part about the exterminating business was not the service itself, but the advertising, accounting, budgeting, and client records. Reggie excelled in these areas thanks to his education at Baker University and his previous small business experience owning Gunter Candy company in midtown Kansas City.

In 1949, right around when Reggie Gunter took over his cousin’s pest firm, his daughter Patricia Gunter marries her high school sweetheart – Norman Besheer – after Norman’s return from serving in the United States Marines Corps. The two have now been married for over 70 years. In 1971, Norman – who previously worked as a corporate lawyer for several public utility companies and downtown law firms – took the reins and became the 2nd generation of family members to take over the business. Jay Gunter Besheer – son of Norman and Patricia Gunter Besheer – occasionally re-surfaces one of his oldest memories. As a young seven or eight-year-old child in the 1960s, his grandpa Reggie Gunter would take him out on pest control routes. Jay’s memories of his grandfather were only fond and always talk about how close the two of them were. Because of Reggie, Jay knew he wanted to one day take over his pest control company. Since a young kid, this was always his dream, and he did just this in the late 90s! In 1977, Jay graduated from the University of Missouri with a business degree and studies in entomology. His father Norman Besheer owned Gunter Pest at the time, but Jay wanted to prepare for taking the reins one day after his dad and grandpa.


After graduating, Jay joined Gunter Pest as a full-time pest control employee, working under his dad and learning every role within the company. In 2000, Jay Gunter Besheer officially took over Gunter Pest & Lawn, formally known as Gunter Pest Management, as president, moving Norman Besheer to a new role as CEO. Norman still drives to work as active CEO daily at 93 years old and works alongside his son Jay, grandsons Noah and Luke, and granddaughter Hayley. From the 1940s to today in 2021, our family business has faced four owners, multi-million-dollar revenue growth, sustainability growth, and a team that once started with one employee and a mere 50 clients to nearly 30 employees and thousands of customers. Today, the company is still owned by third-generation Jay Gunter Besheer, but a new generation of family members is peaking through and will soon take over the reins.

Jay is nearing retirement, and his son Noah Gunter Besheer will soon walk in his footsteps and continue a family business tradition that his great-grandfather started over 70 years ago. Alongside Noah is his sister Hayley – who sits in a pivotal role to help grow the company as Director of Business Development.

And, Noah and Hayley’s first cousin – also a great-grandchild of Reggie Gunter – Luke Besheer is a summer technician for the first time this year while he’s waiting to go back to school at Benedictine College on a Lacrosse scholarship.

Luke follows the footsteps of his brother Bailey, six first cousins, and multiple aunts and uncles – who’ve all been part of the Gunter family business as past employees over the last sixty years.

Our new wave of fourth-generation family members has brought exciting modern ideas to the table with the hopes that our historic Kansas City business will continue to evolve, grow and learn. When fourth-generation family members Hayley and Noah hopped on board a few years ago, they worked hard to give the company a fresh and exciting facelift – like a new logo, new website, social media presence, and a huge investment toward sustainability.

Over a three-year span, we renovated our Waldo business headquarters with solar-powered buildings, electric Tesla vehicles and charging stations, a paperless operating system, and our own beehive to increase our efforts toward sustainability.

We’ve noticed dozens of new pest control companies and termite pest control companies in Kansas City sprouting up over the years. We pay a fair wage, employee benefits, and team vacations, so we may not always be able to compete with cheap pest control prices. But – one thing we do know – our employees become like family here and most have stayed for ten to thirty years, building deep-rooted careers amongst our family members.

When people are searching for a pest control company to use in the greater Kansas City metro area, we can guarantee exceptional family-like service, knowledge and expertise, high employee retention rates, and a conscious mindset toward our sustainability efforts. We plan to keep Gunter in the family – perhaps four more generations from now you’ll see us in the year 3000.

You can call us any time to take care of your insects and rodents. We will keep your family safe and pest-free. Our phone number is 816-444-2847.


7 Tips For Pest Proofing Your Pantry